Jailbreakers have had their share of issues while installing tweaks on Electra jailbreak toolkit. Here’s a new tool called Tweak Installer that will make the installation process a breeze.

What is Tweak Installer?

Tweak Installer is a desktop-based Debian package installer for Electra development toolkit. It is developed by Joseph Walden.

This tool also installs tweaks and themes on your Apple device remotely with SFTP. Here’s how it works –

Apart from Electra, it also supports Yalu jailbreak for iOS 10-10.2 firmware. However, its utility remains limited because Yalu already comes with Cydia.

Is it safe to use?

Yes, it is completely safe to use. All tweaks and associated files are only transferred to the correct locations.

Moreover, it also allows you to install tweaks that contain tweak-specific data that must be moved outside of bootstrap. For example, the Switches and Application Support folder present in some tweaks.

It establishes SFTP connection using the reputed WinSCP client so there’s nothing you need to worry about.

It’s fully open source and its code also available for everyone to use. If you want to improve upon this tool, you can take a look at it on the developers’ GitHub page.

Step 2 Download the ZIP archive from the link above and extract it to any location on your computer. You can use Windows inbuilt ZIP manager or use 7Zip utility, which is more powerful. 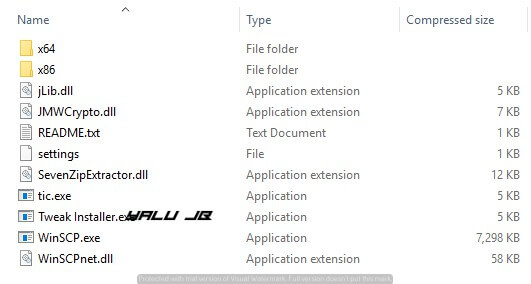 Step 4 Input the following details in their respective fields – 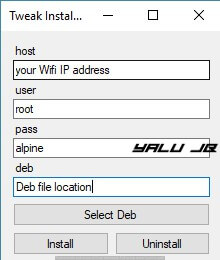 Alternatively, you can enter 127.0.0.1 (localhost) in the host field above. If you choose this option, you must connect your device to your compueter via USB.

Step 5 Once the all the fields are ready, click on Install. It will now install the required Deb file on your iPhone, iPad, or iPod touch.

That’s pretty much it! If you want to install tweaks manually, you can give this guide a read.

Tweak Installer only supports Windows computers for now. However, this doesn’t mean Linux and Mac users will be left in the lurch.

The developer is currently working on Linux and macOS versions. Hopefully, they will drop sometime during the next few days. Joseph might also create an on-device Deb file installer for iPhone if time permits.