The infamous Jake Blair development team recently demonstrated an untetherer for iOS 11.x. Here’s when the untethered jailbreak will be released.

Spicy is an upcoming untether package for iOS 11 developed by the Jake Blair development team.

It is based on a new kernel vulnerability that Apple patched in iOS 12 before Electra jailbreak gained iOS 11.4.1 support.

This untether package essentially writes a script, which fires each time you reboot, into the bootchain.

The Jake Blair development team posted the video below on their official YouTube channel.

While Spicy is a fully untethered jailbreak, it does have a few caveats. For instance, there’s a slight delay after the boot-up sequence while the tool runs some scripts in the background.

This results in significantly higher boot-up times as compared to stock firmware. Developers Siguza and Ben Sparkes want to speed things up but, again, no promises have been made.

As far as support goes, all iOS 11 versions are vulnerable and, therefore, all versions up till iOS 11.4.1 are compatible.

Spicy will support all devices that are capable of running the iOS 11 operating system. This means all devices including iPhone X, iPhone 8/8+, and below are supported.

The jailbreak website will utilize a WebKit exploit and the installation process of the untether package will be similar to the one used by totally not spyware jailbreak.

According to Siguza, the Jake Blair team plans to publicly release the tool for all devices in the near future.

But before that, they need to ensure that it is fully compatible with each device and firmware combination.

Yes, we plan to release it once it runs smoothly on all devices.

This is a monumental development, especially considering the fact that untethered jailbreaks have all but disappeared from the scene in recent years.

Some even consider untethers to be a thing of the past with all those stringent security measures Apple adds to its operating system on a regular basis.

Since a lot of users prefer a complete jailbreak experience of an untethered jailbreak, iOS 11 users will likely hold off on upgrading their Apple device to iOS 12.

Which iOS version will you move to and why? Leave your replies below. 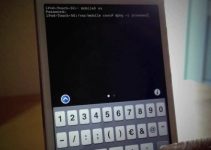