Apple has just seeded the fifth beta version of its latest iOS version, iOS 11. It is now available for download for developers.

As I expected, Apple introduces many changes, enhancements and performance optimizations.

A new FaceTime dial tone is now in place. We also have a new welcome screen in iPad multitasking and a security feature for authenticating computers.

You can download iOS 11 beta 5 firmware version via the Apple Developer Center or use OTA (Settings> General> Software Update). 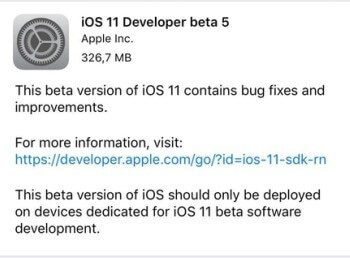 Here are the direct download links for iOS 11 beta 5. You can use these without being a member of Apple’s developer program.

As always, don’t forget to perform a complete backup before you update your iOS device.

Here’s the full list of all changes in this beta update.

Regardless of all these new features, iOS 11 beta 5 is still a bit buggy, to say the least. If you are interested in jailbreaking, there’s no good reason as to why you should upgrade.

If you plan to install this beta, don’t forget to notify us about the new features in this version.

For more Apple news, subscribe to our social channels.