Although Luca Todesco has left the jailbreak community, he still likes to contribute every now and then. Here’s what the young hacker just posted on Twitter.

Luca’s KPP bypass was believed to be fully compatible only with iOS 10-10.2. However, a new tweet by the young Italian seems to suggest otherwise. 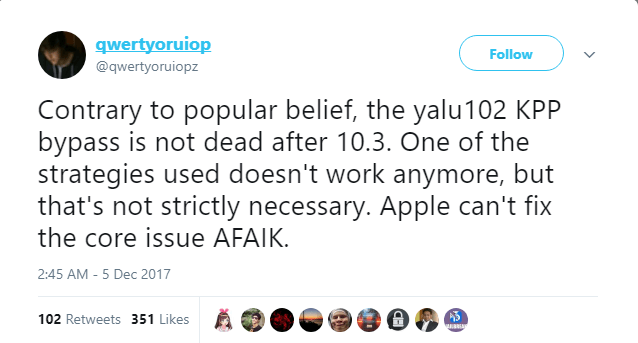 It also works for as new a version as iOS 11.2, which is the latest firmware version right now. However, Luca wasn’t able to test it out fully and says it might work due to the reason stated above.

For those who don’t know, KPP is a security mechanism present in all 64-bit Apple devices running iOS 9 and above.

How does it work for newer versions?

The reason why Luca’s KPP bypass still works for newer iOS versions is its method of implementation. Apple can’t fully patch it without making the requisite changes to the hardware.

This bypass is similar to how a Bootrom exploit requires hardware changes to completely patch it fully.

The last time this happened was with iPhone 3GS (old Bootrom). Consequently, Apple had to release new models with updated Bootrom to patch it.

No, this doesn’t imply that Luca will work on a jailbreak or a new jailbreak will drop soon.

yalu102’s KPP Bypass will not start working right out of the box. As is evident, certain edits will still be required so as to make it fully functional for each of these versions.

Furthermore, we will still need to have proper exploits for the target firmware to bundle along with it.

If it didn’t require edits or changes, Saigon would have been compatible with iOS 10.3 and 10.3.1.

So what are you going to do now – stick to iOS 10.3.x or upgrade to iOS 11? Let us know in the comments section below.