Another day, another tweak. This amazing new tweak turns off the shutter sound on your iPhone’s camera. Here’s how you can download it on your iPhone, iPad, and iPod touch.

Stealthsnap Cydia tweak allows you to disable camera shutter sound system-wide. It is developed by tweak developer, Lex, who is a newcomer on the jailbreak scene.

This is very useful for specific iPhone models that don’t come with this feature. For example, the government in Japan doesn’t allow smartphone manufacturers to add such feature in their devices. 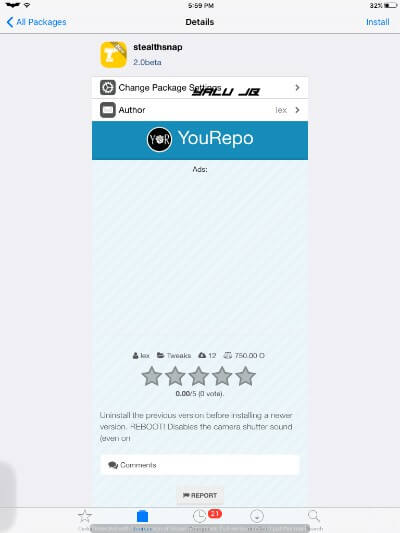 The reasoning behind this is to prevent creeps from photographing anyone without their permissions. While anyone who wants such feature may have ulterior motives, but a lot of decent people don’t.

Therefore, this tweak is of immense importance to all those who live in Japan.

Is it safe to use?

It is very safe to use because it just renames the cameraShutter.caf file.

Once you remove the tweak, it will simply rename that file and you will get back the original shutter sound.

If you live in a country where shutter sound stays enabled at all times, this tweak is a must. Recommended!

What stands out the most about this tweak is its crazy compatibility. It supports all jailbreak from iPhone OS 1 to iOS 10.2. When an iOS 11 jailbreak drops in the future, it will support that without any further modifications.

Stealthsnap is available for download on Lex’s Cydia repo (lex.yourepo.com). It is compatible with iPhone OS 1-10.2.