Hacker Francisco Alonso has hinted that he might be working on a public jailbreak. Here’s all you need to know about it.

Revskills is working on a public jailbreak

Francisco Alonso stirred up a hornet’s nest yesterday as he hinted on a public jailbreak for iOS 11. He tweeted that he is working on a jailbreak and wants to decide a codename for the tool. 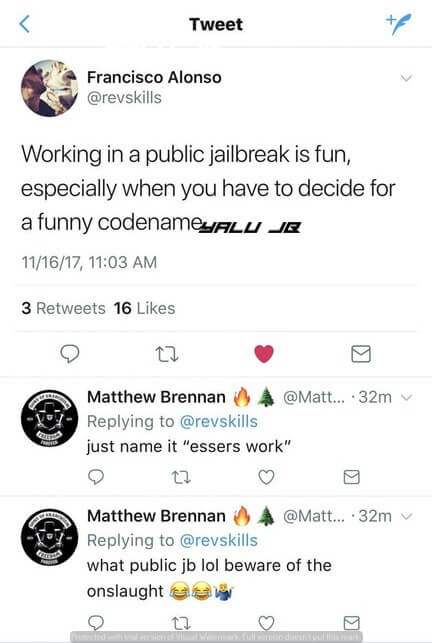 Luca Todesco, the developer of Yalu jailbreak, also replied to this tweet, lending it more credibility.

A few hours ago he also sent out a tweet saying he required an iPhone X on iOS 11.1.2 to test “something”.

His Twitter handle has now been deactivated and you won’t find this tweet elsewhere. Maybe trolls began pestering him about the release date and compatibility of his jailbreak and he got sick of it.

His Twitter account has over 14,000 followers and disabling it seems a great way to keep spam at bay.

For those who don’t know, Francisco aka Revskills is a very talented Spanish hacker and has published a lot of works about hacking and security research.

He is respected in the security research community and has also attended many conferences. In 2016, Apple invited Alonso along with Luca Todesco other hackers for discussing iOS security.

Therefore, you can safely assume that he is completely legitimate.

Is a public iOS 11 jailbreak inbound?

Interestingly, the hacker didn’t reveal any details about release date or compatibility. Even before people could ask him anything, he deactivated his Twitter account.

I guess he might be working quietly and doesn’t want any extra attention from Twitter users and trolls alike. And since he requested an iPhone X, he is certainly working on iOS 11 firmware.

We already have proof that iOS 11 and iPhone X can indeed be jailbroken. Now, it’s only a matter of getting a serious jailbreak developer onboard.

Now before you get aboard the hype train, I would still recommend staying on the lowest possible version. If you are on iOS 11, just don’t upgrade right now before the developer says anything.