Another day, another tweak. This new tweak aims to add tons of new features to the Music app. Herer’s how it works.

Musessions Cydia tweak is a system-wide music ripper that works with a plethora of online music streaming services. It is developed by tweak developer CreativeBeing. 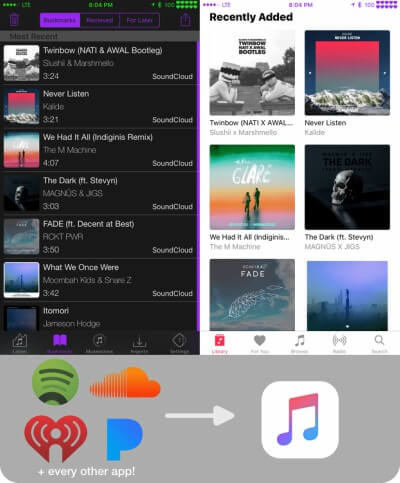 It’s very feature rich and here’s what you can do with its options.

If you use several online music streaming services, then this feature is for you. It keeps all your favorite songs in one place instead of many.

Here’s a video demonstration of the importing feature.

You can use the “Import Now Playing” or “Bookmark Now Playing” functions to quickly add songs to the Music app. To use this feature, you must have an Apple Music subscription or MusessionsImporter add-on, which is available on BigBoss repo.

We all experience forgetfulness and fail to remember the name of “that song” you listened to while ago. This is where Musessions comes in.

Musessions keeps a system-wide history and neatly organizes them into listening sessions. Each “session” keeps track of all music you were listening to in a specific period.

This tweak intelligently starts and stops sessions after a user-defined inactivity period. By default, this value is set to 15 minutes. This means each time there’s a gap of 15 minutes between your songs, it will create a new session. All songs you then listen to will be counted as a part of this new session.

You also delete or stop session tracking, either manually or by an Activator action. After a span of 14 days, the older sessions will be junked along with its album artwork.

You can select any song to bookmark it for later listening. Now, this feature is not unique but the way this tweak handles bookmarks is.

You can bookmark songs more than once and that too, at different times of the track. This is very helpful if you are listening to long mixes that have different songs each starting at a different time.

This tweak also has its own music player. You can start playing songs from your bookmarks or replay a session. This feature comes in handy in a lot of different situations. 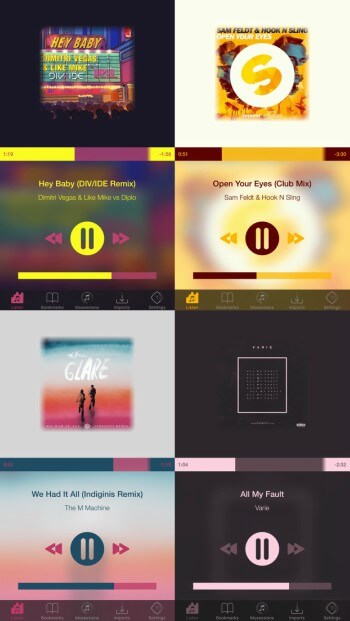 For example, you can start replaying a specific session when you are in the gym to get all pumped up.

Moreover, it also has its own user interface that changes according to the album art of the now playing track.

You can now share your favorite songs with your friends or family in an instant. The best part about this feature is that the people you share your songs with need not be jailbroken or even be on the same platform (iOS in this case).

The sharing feature gives you three different sharing options – you can share with users having Musessions, iOS, and Android. You can even queue your shares so as not to disturb your friends during the night.

If some other Musessions user sends you a bookmark, it will automatically start playing or go to the queue if you are already listening to a song.

If there’s any streaming service Musessions integrates perfectly, it is Soundcloud. It has a whole host of features dedicated just to Soundcloud.

This tweak is powered by an “intelligent” algorithm that automatically selects the song with the best bitrate. Other than that, it also utilizes Soundcloud as a fallback if no iTunes ID exists for a particular song.

Activator actions are an integral part of Musessions. You can use them for performing actions such as – Bookmark, Share Now Playing, Import Now Playing, End Session, etc.

This tweak is a must-have for all you audiophiles. At three dollars, it’s price is totally justified and it’s clear the developer has put his heart into this tweak. With all these features, I can only recommend it to all jailbreakers.

Here are some more jailbreak tweaks that enhance your music experience. 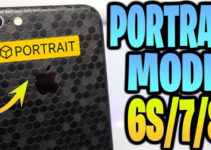