Today, we welcome a new guest to the Yalu jailbreak community. Here’s the complete interview.

Firstly, let me introduce our guest, Ivano Bilenchi, who is just as important a developer as Saurik and Team Pangu.

He is considered nothing short of a legend within the jailbreak community and is the developer behind the most popular jailbreak utility of all time – iCleaner.

A. I’ve always programmed random things since I was a child, though I started developing specifically for jailbroken iOS in 2011.

While I did a few random things in the very beginning, I consider iCleaner my first real contribution to the jailbreak community.

It has taught me the basics of iOS development and improved my skills considerably, so I feel very strangely about it.

Q2. iCleaner is considered a legendary jailbreak app. What made you develop it?

A. I got sick of iOS not having any storage management capability for third party apps, which often became bloated with huge, unmanaged caches.

I was generally unhappy because I found it troublesome to understand what was taking up so much storage space in the dreaded “other” category. 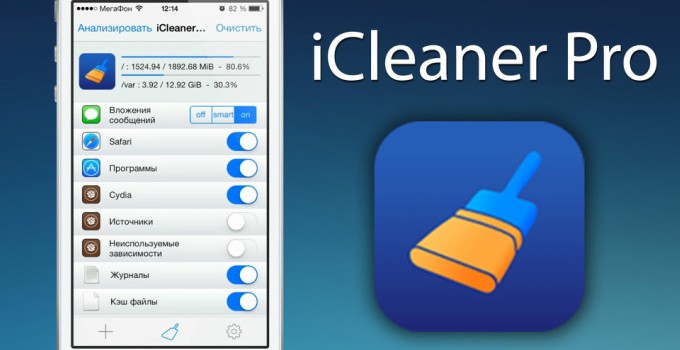 There were no serious solutions to this, so I built my own, which I later decided to share with everyone else as the first version of iCleaner.

Q3. The new iCleaner version 7.6.2 comes with the new “app thinning” feature? How does it work?

A.  It is inspired by an identically named feature that Apple introduced for App Store apps.

Basically, iCleaner now deletes some of its own unused assets on install in order to free up space on the root partition, which has very little free space in the latest iOS releases.

As an example, iPad launch images are deleted if it is installed on an iPhone, and binaries are deleted based on the detected iOS version.

iCleaner needs multiple binaries in order to run on a very large variety of iOS versions since I’m still supporting all the way back to iOS 4.

Q4. Are you currently working on any project other than iCleaner?

A. I’m working on many things actually.

As far as jailbroken-related development goes, I have an ongoing project which is basically a toolchain that lets developers build for jailbroken iOS by only using Xcode, inspired by iOSOpenDev (which is outdated and doesn’t really do many things I need).

It does a lot, from building, to signing, to packaging, etc. It also patches the latest Xcode versions to let them build for armv6, which is required to support ancient devices such as the iPhone 3G.

I use it to build iCleaner already, though it’s still lacking a few major features that I’m slowly building in my spare time.

Other than this, I have a job as a research assistant at my university in the field of artificial intelligence and semantic web, so I work on many different, fun research projects.

Q5. Why do you give away the “Pro” version for free? Have you ever felt that you deserve money for developing an app that millions of devices use?

A. The Pro version was actually born in order to keep away the most misused features from the vast majority of users. A more thorough explanation is available here: http://blog.ib-soft.net/2013/03/icleaner-pro.html

iCleaner also already provides income via its ads, and users can purchase a registration code to remove them and unlock additional features.

To be honest, it has been far more profitable than I’d have imagined, so I’m already fine with it.

Q6. Do you own a jailbroken device? If yes, what are your favorite Cydia tweaks?

A. I do, actually I have quite a few of them for development purposes, each on specific iOS versions.

My daily device is an iPhone 7 on iOS 10.1.1, jailbroken with whatever works between yalu and extra_recipe.

I mainly jailbreak for the CLI packages, though I also do install a few tweaks. Favorites are definitely iCleaner Pro (:p), Activator, Cylinder, Anemone and any CC tweak that uses Flipswitch.

I used to have others (f.lux comes to mind), but they were slowly included in iOS

A. iCleaner will keep being my flagship product, as it’s become complex and used enough to be a part time job on its own :p I plan on keeping it updated through the various iOS releases.

I’ve also been working on a major new release (v8.0) for a long while, though it’s still in very early stage since I never find the time to work on it (work and uni exams take away a lot of my time).

My Xcode toolchain is also a very likely future contribution, though I need to find the time to finish it as well.

In general, keep in touch with me on Twitter (https://twitter.com/ivanobilenchi) for updates about the stuff I’m currently working on.

There you have it! I’m sure Ivano has surprised you with his incredibly in-depth answers. Don’t forget to follow him on Twitter for the latest updates on iCleaner and other projects he is working on.

For more such interviews, subscribe to our social channels.