Apple has just seeded the fifth beta version of the iOS 12.3 operating system. Here’s how you can download it for your iPhone and iPad without a developer account.

iOS 12.3 Beta 5 weighs about 90MB and comes with a build number of 16F5155a. As usual, this minor update focuses on improvements and fixing bugs present in older versions.

Apparently, beta 5 also introduces some new bugs that weren’t present in beta 4 or below.

Several users have reported that the app update function is no longer working like it’s supposed to. Tapping the update button just causes it to spin forever.

Users with A12/A12X devices have also complained about battery drain after upgrading.

Apple will probably release the public beta of this update within a few hours.

But until that happens, you can use the download links for the developer version without actually owning a paid developer certificate.

iOS 12.3 Beta 4 was an absolute nightmare. The version had a lot of bugs, caused incessant battery drain and had a whole lot of user interface bugs such as videos pausing randomly and notifications popping up inconsistently.

If you find yourself affected by these issues, an upgrade is recommended.

By upgrading to beta 5, all of your previous issues should get fixed, even though this update comes with its own fair share of bugs. 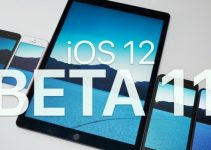