Home
Cydia
CatchaThief takes a picture of your iPhone thief

Another day, another tweak. CatchaThief helps you keep your device safe from intruders and thieves. Download this tweak for your iPhone, iPad, or iPod below.

Despite Apple’s advanced biometric security technology, not much stands in the way of a thief and intruder and your private data if he’s able to bypass your passcode.

Thankfully enough, this new jailbreak tweak will allow you to not only pinpoint but also catch the suspect.

CatchaThief Cydia tweak clicks a picture automatically whenever someone types in an incorrect passcode. It is developed by eminent developer Jake James.

It utilizes the front camera to take photos and mutes Flash and camera shutter sound effects. 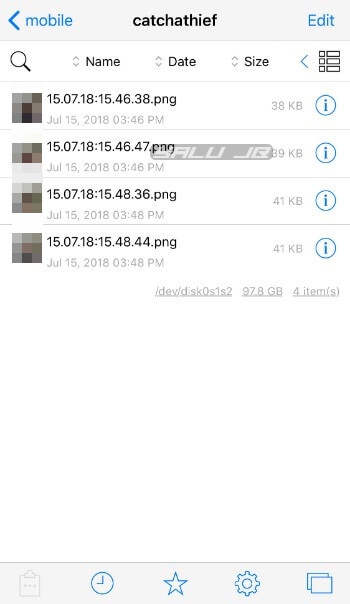 Once the photo is taken, it gets stored in a new location (/var/mobile/catchathief) on your device’s root filesystem.

Using this tweak is pretty straightforward. All you need to do is install it from Cydia and you’re good to go. There’s no Settings or preferences that require configuration.

As of now, this tweak doesn’t support Face ID or Touch ID. However, biometric technology support doesn’t carry much value as any thief will eventually resort to the passcode after multiple failed attempts.

Though not as feature-rich as iCaughtYou Pro and PickPocket, CatchaThief is still better than having no protection in place.

In its present form, it will not protect you from thieves as photos are present on-device. However, it will ensure kids or nosy relatives don’t try to snoop around your iPhone without your permission. Recommended.

CatchaThief is available for download on BigBoss repo for free. It is compatible with iOS 11.

The developer also intends to add more features to this tweak. The future versions could send you intruder’s pictures via email or even introduce Touch ID and Face ID support.

All these features, if realized, will make it a worthy alternative to PickPocket that no longer supports new firmware.