Another day, another tweak. This new tweak aims to unlock the stock Wifi limit that Apple imposes on iPhone users. Download BoostedWifi Cydia tweak for your iPhone, iPad, and iPod touch below.

Limitations are present in each and every component of Apple’s latest operating system.

One such iOS component is Wifi that hides all networks with an RSSI signal strength weaker than -80. This is where this new tweak comes in.

BoostedWifi Cydia tweak removes the default signal limit and shows all Wifi networks your device can detect. It is developed by tweak developer KingPuffdaddi.

In addition to displaying the hidden networks, it also displays the RSSI signal strength value associated with each network.

For the uninitiated, RSSI value determines how strong the signal emanating from a network is.

Once you install this tweak, the WiFi section will display a lot of other networks, which were hidden earlier.

My iPhone was able to detect over ten networks as opposed to just two, prior to installing BoostedWifi. 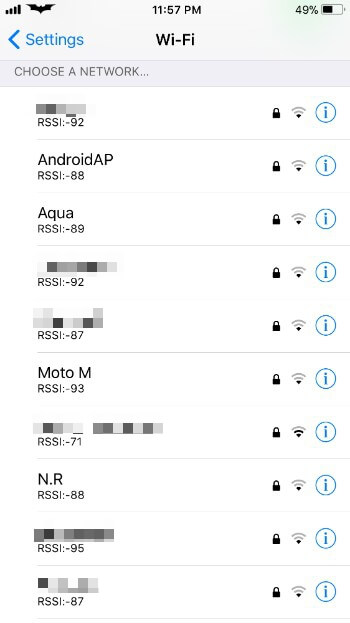 There are no Settings or options that you need to configure. Just install the tweak and it will start working right out-of-the-box.

All you need to do is go to Settings and tap on Wi-Fi.

This tweak is a great Wifi enhancement and offers a feature that no stock app will ever offer. Recommended.

Though this tweak works exactly as described, it is missing a few more additional features like displaying passwords.

BoostedWifi is available for download on BigBoss Cydia repo for free. It is compatible with iOS 11.

There are better alternatives to this tweak like GoodWifi and WifiBooster. However, their developers are yet to push an update for Electra jailbreak. Until that happens, you can keep using this tweak.