Another day, another tweak. This tweak aims to keep you informed about your battery life at times. Here’s how it works.

There’s only so much information you can know about your battery in vanilla iOS. To access advanced metrics, you must use a Cydia tweak. One such tweak is batterydata.

batterydata Cydia tweak dumps all the information related to your battery in the terminal. It is developed by tweak developer Sticktron.

Its major downside is that it doesn’t have a graphical user interface. However, it still manages to display tons of battery data, which no other tweak does. It fetches the same data used by App Store applications such as BatteryLife. 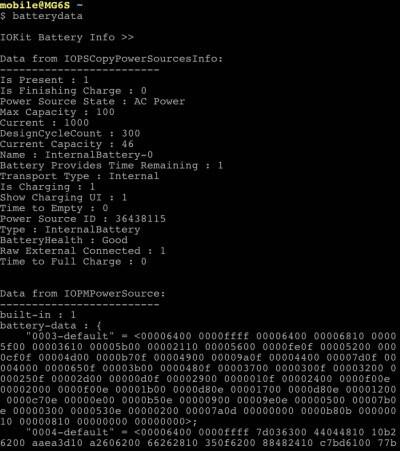 To use it, simply type batterydata in any terminal emulator such as MTerminal and let it work its magic. You will get a dump of tons of metrics and other details such as transport type, current capacity, battery name, etc.

One thing that really stands out from the others is the designcyclecount. The value of 300 signifies that iPhone batteries are designed only for 300 charge cycles. Afterward, they start to provide less juice.

It can pull a lot of data as compared to App Store applications. This is because Cydia tweaks have root access while App Store apps don’t. Recommended.

batterydata is available for download on Sticktron’s Cydia repo (http://sticktron.github.com/repo) for free. It is compatible with iOS 10.