Home
Firmware
A6, A6X, A5, and A4 devices can now activate after a downgrade

A lot of users experienced issues with activation after downgrading. Apple seems to have fixed this issue and users can once again downgrade freely.

As you already know, Apple started signing a lot of firmware versions a few days ago. This bizarre move gave a lot of users the opportunity to go back to jailbreak-able versions.

The downgrade party didn’t end well for some users who downgraded from iOS 10 due to activation problems. The users who changed their MAC address somehow managed to pull through.

A6 and A6X devices

For some unknown reason, you can again activate A6 and A6X devices properly if you downgraded from iOS 10.

This development was confirmed by many legacy developers such as eob2000 and Alitek123. 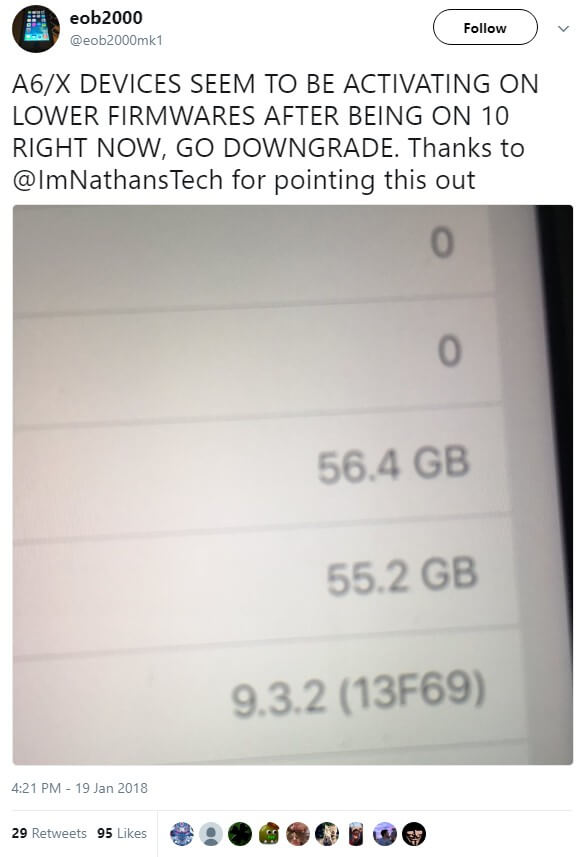 A5 and A4 devices

A few hours ago A5 and A4 devices owners also posted about similar activation issues. This includes the regular SIM activation method, which suggests that something went horribly wrong with Apple’s activation servers.

Generally, this happens before Apple is about bungle up their firmware signing servers. However, this wasn’t the case this time as a lot of users were hoping for.

If you downgraded with a modified MAC value, it’s safe to change it now. You will get no error whatsoever because Apple’s servers now support signing.

Remember, this will not work with devices having the A7 chip or above. The reason behind this is that Apple enabled activation only for specific legacy models.

If you have SHSH Blobs saved for a particular version, you can now downgrade freely and activate it. For those who own a legacy 32-bit device can easily downgrade without requiring SHSH Blobs.

I don’t know how long will this continue, so you got to make it quick!

If for some reason Apple blocks activation again, just leave a comment below. I will post an in-depth tutorial on how to fix all post-downgrade issues.